W, Here is the first mini album released by NU'EST W. It was released on October 10, 2017. It peaked number one in Gaeon chart in 2017 and is NU'EST best selling album yet.

"Where You At" is the lead single off of W, Here, one of only two songs along with "My Beautiful" on the album to feature all four members of NU'EST W. The EP's four other tracks serve as solos, giving each of the men a chance to reintroduce listeners to their individual flares: Ren's "Paradise" is an EDM track, Aron's "Good Love" is a groovy alt R&B tune, JR's "With" is an uplifting mellow rap track, while Baekho's sweet ballad "Happy Until Now" rounds out the set.

In 2018, NU'EST W won a Disk Bonsang at the Golden Disc Awards for the album. 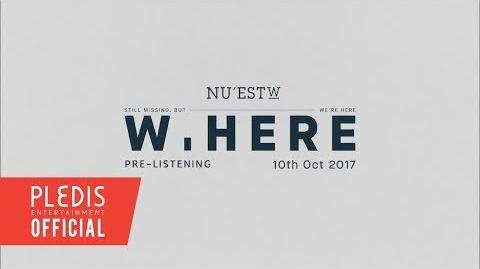